My parents were here for a couple of weeks, and we all went to Salzburg for a weekend. My mother likes the movie The Sound of Music, and took me to the musical when I was a child, so of course we took her on a tour of some of the sites where the movie was filmed.

Our guide for the morning, Peter, was very knowledgeable about the Trapp family, the sites, and the making of the movie. 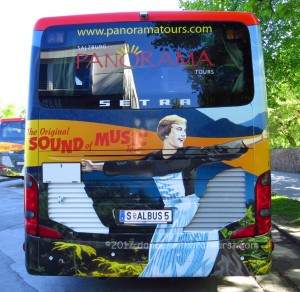 The bus was comfortable and obvious. Peter had made a DVD with scenes and songs from the movie, to correspond to the stops on the tour, but to be honest looking out the window was more interesting to me because I hadn’t seen these places before.

The first stop was Leopoldskrone, a privately-owned house where many of the outdoor/lake scenes were filmed.  I’m still not sure of the best camera settings for landscapes on cloudless summer days… 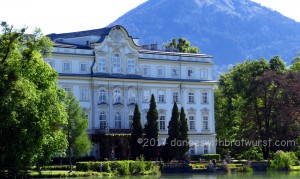 Leopoldskrone. Used for outdoor scenes; some of the interior rooms were copied for interior scenes filmed on a soundstage in Hollywood. 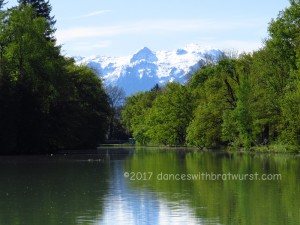 The lake was lovely. 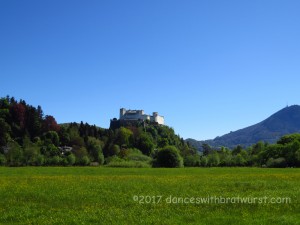 Fortress Hohensalzburg, high above the city.

Next we drove by the wall used to film the scene where Maria got off the bus for her new job. 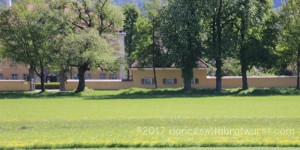 Guest photo by David Taylor, taken from the bus.

Then we stopped at Schloss Hellbrunn, but only to see The Gazebo (from “16 going on 17” with Liesl and Rolf∗).  It had been moved there from its original location near Leopoldskrone because the owners were tired of people breaking into their yard to dance in their gazebo. 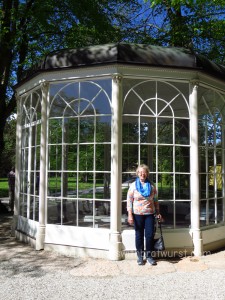 It looks larger in the dancing scenes because a larger one was built on a Hollywood soundstage for the dialog/dancing. 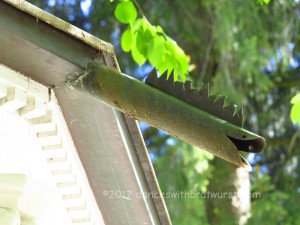 The gazebo has lovely gargoyles to siphon off the rain.

Next we drove by Nonnberg Abbey, where the real Maria von Trapp was a novice, and where many of the convent scenes and the escape scene were filmed.  It’s the oldest convent north of the Alps and is still functioning; visitors are not allowed inside but it’s possible to walk up the hill to the church and look around.  We did not; we just admired it from the bus.

Nonnberg Abbey, from the bus

Next we headed out into the countryside, into the Salzkammergut, which is a lake-and-mountain region quite popular with Austrians. The trip took about 45 minutes longer than usual, due to “first nice Saturday–everyone wants to go to a lake” traffic. But we had a beer, and music from the movie, so we just relaxed and enjoyed the scenery. 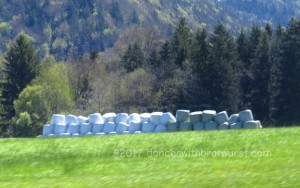 Salzburger Land had a good giant marshmallow harvest this year. 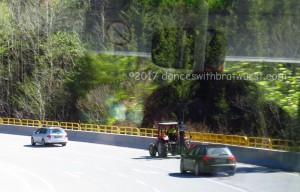 We got held up briefly by a tractor–felt like home! 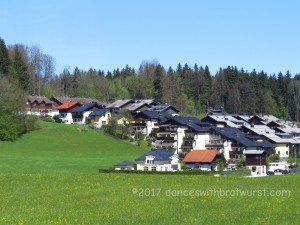 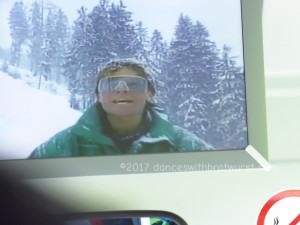 Peter kept us entertained through the traffic jam with with a John Denver/Julie Andrews Christmas special that had been filmed near Salzburg. 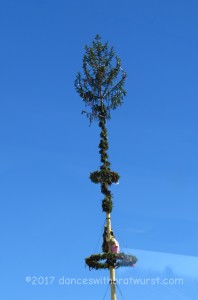 Fresh Maibaum in one of the villages.

First stop was St. Gilgan am Wolfgangsee, to enjoy the panorama from the first seven seconds of the movie (we stopped for longer than seven seconds). 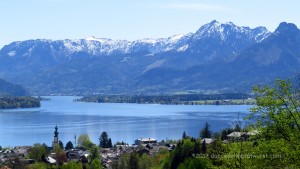 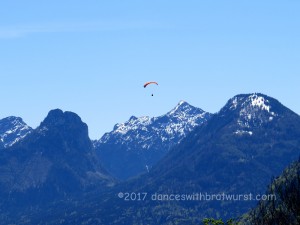 I don’t remember parasails in the movie. 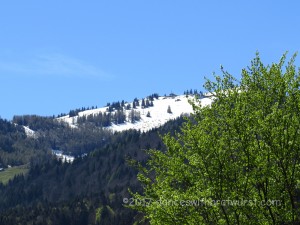 Our final stop for the day was the town of Mondsee. The movie wedding was filmed here in the St Michael Basilica. 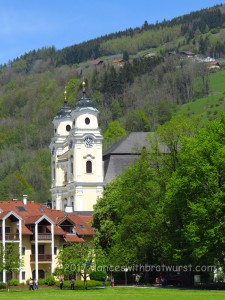 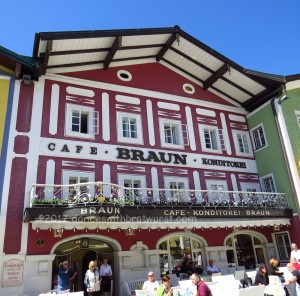 On the recommendation of Peter, we had a lovely Apfelstrudel mit Vanillesoße here. 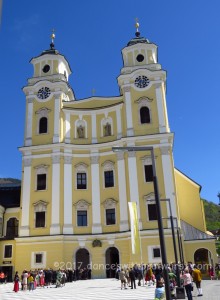 I took one exterior photo of the church, and of course there’s a pole in the way. 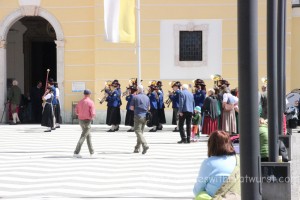 There was a real wedding going on that afternoon; here a band plays as everyone waits for the bridal pair. 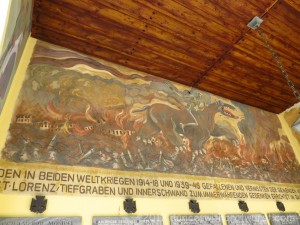 While everyone was waiting for the wedding, I walked around the building and found the war memorial.

And then I found the side entrance, so I could take some pictures without disturbing the wedding procession. 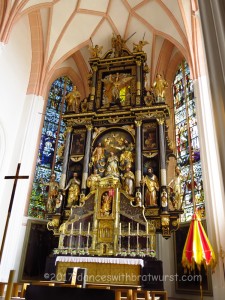 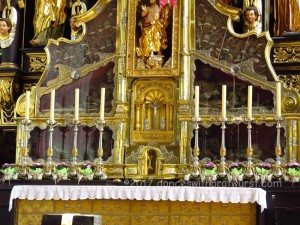 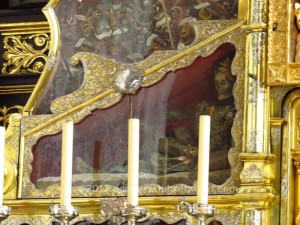 They are. Decorated skeletons!

I really wish I would have read this Atlas Obscura article two weeks ago, I would have looked for Abbot Konrad II. 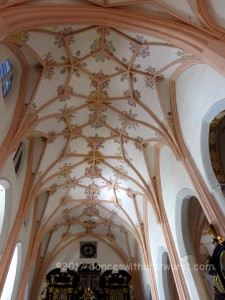 The ceiling was also nice. 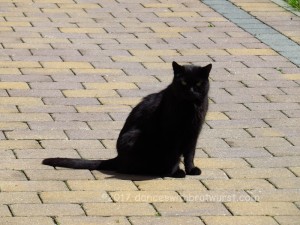 And on the way out of town, we met this dude.

It was a nice day, nice trip. If you’re ever in Salzburg and have 4-5 hours to spare, I can recommend this tour.

∗ Rolf is an asshole. But his real-life counterpart, Sigi, was not a Nazi and actually helped the family escape. Sadly he had to give up his relationship with Agathe (the eldest von Trapp daughter) to stay behind in Salzburg and care for his widowed mother. Since that wasn’t dramatic enough for Rodgers and Hammerstein, they turned him into Rolf the Nazi asshole. The next time you’re yelling “Rolf’s an asshole! You can do better, Liesl!” at your TV screen, spare a warm thought for Sigi.