During the Easter break from my language course, Roland had an afternoon appointment with a customer in Ravensburg, in Upper Swabia, and I rode along.  After a quick lunch of Maultaschen, a traditional Swabian dish and quite delicious, he went to his meeting and I played with my camera for a few hours.

Ravensburg was a major medieval commercial center, and was fortified with many towers and walls in the 14th and 15th centuries. It had no strategic importance in WWII, so the towers and walls did not get bombed.  It’s also the home of Ravensburger Puzzles (we bought shaped like Darth Vader), and calls itself the “City of Play.”

We’ll start our tour in the center of town, near the Rathaus, with the Blasenturm, which we will come back to later. 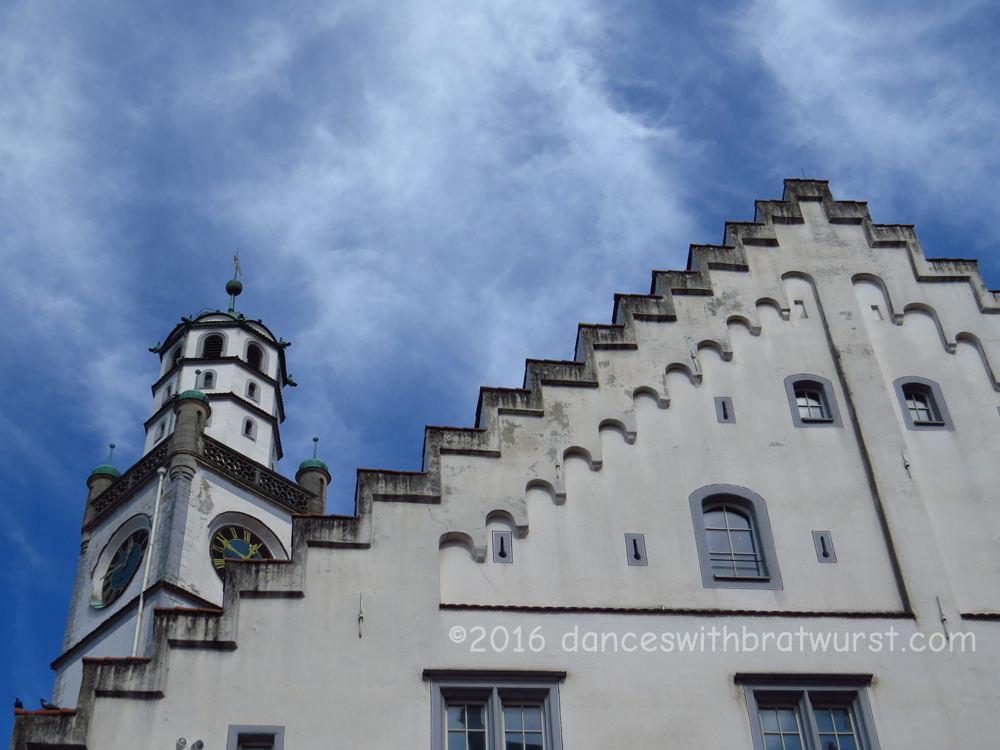 The tower is 51m high; in medieval times a trumpeter at the top would play at the following times: 4 am, noon, 9pm, and midnight. 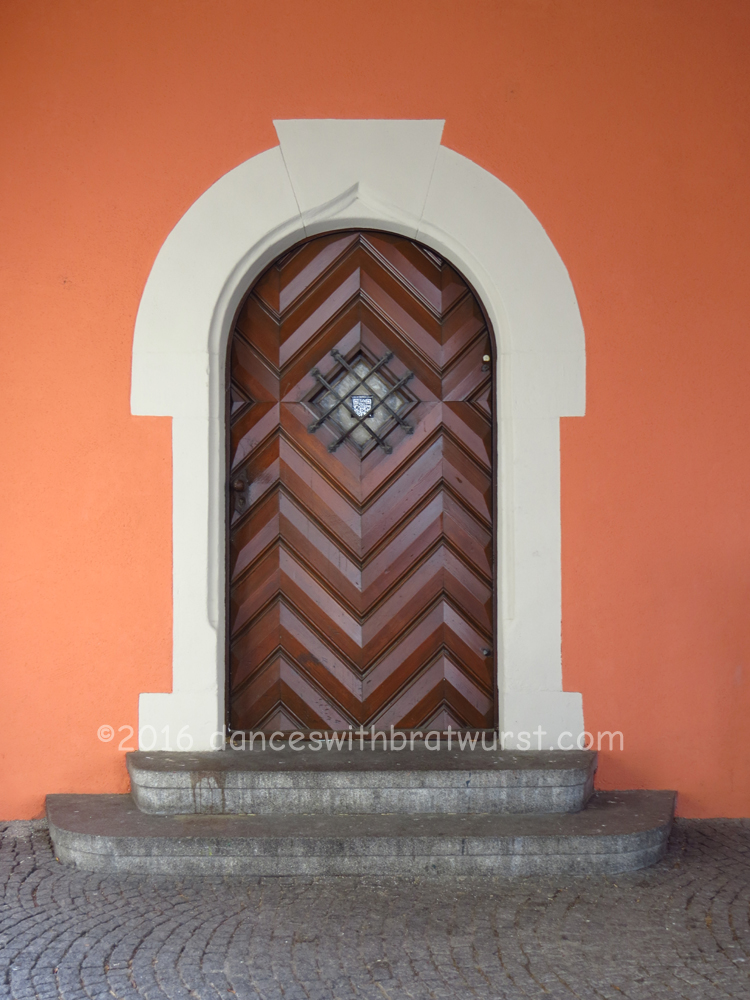 Door in the Rathaus. If you look closely, you can see a QR code in the little window. 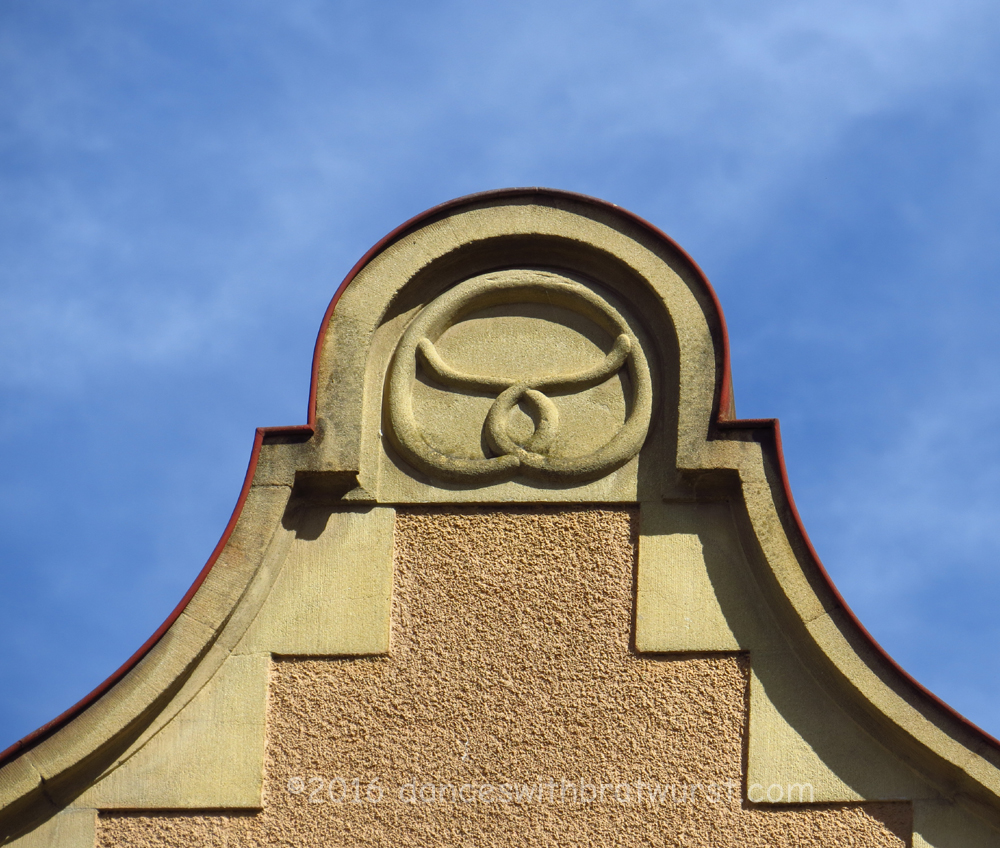 Architectural detail in the Altstadt. 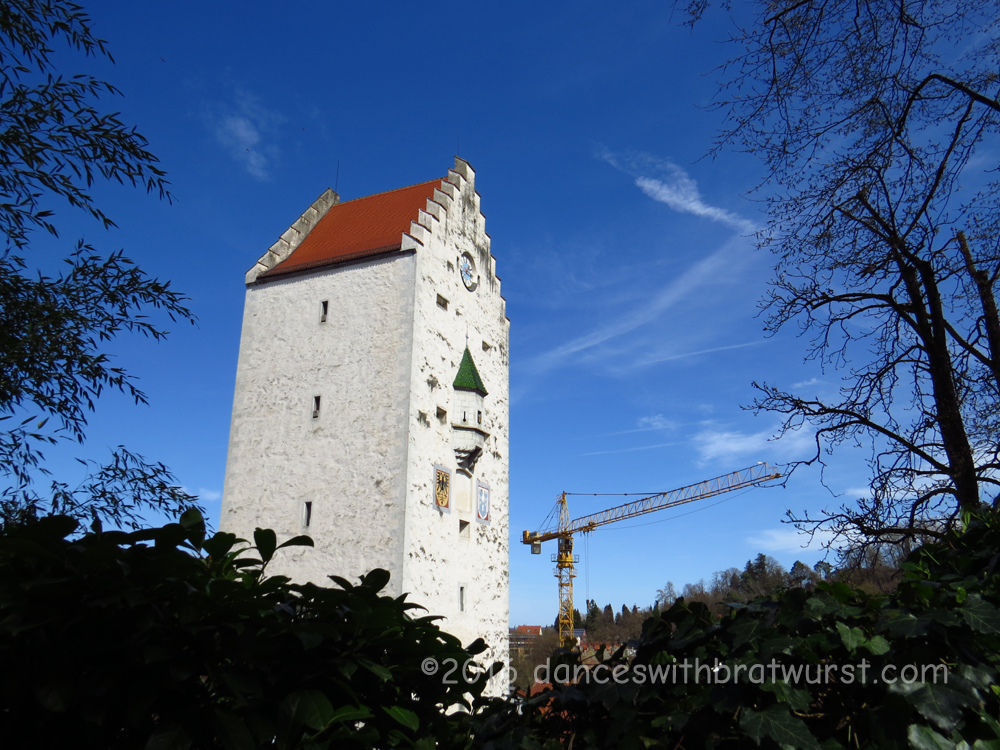 The Obertor, built in the 1430s and 42m tall. Photo taken from a footpath up a hill outside of the walls. 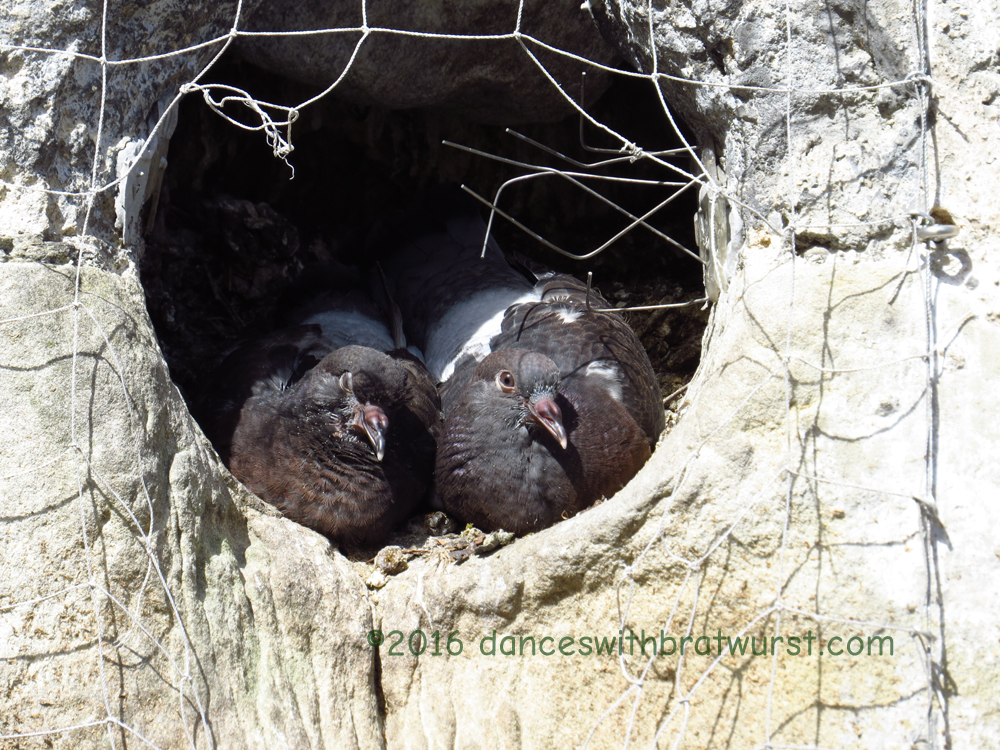 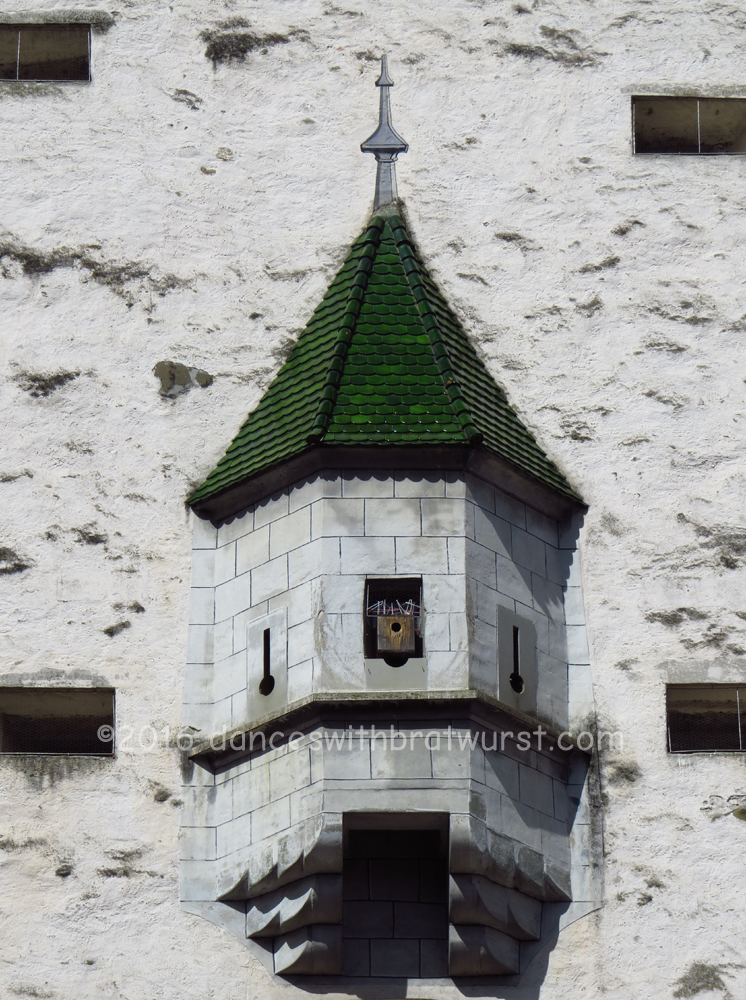 Detail of the Obertor. Fun to see what is real and what is painted.

There was a hiking path just outside the old city walls, so I followed it up the side of a hill that was taller than the towers in the city center. 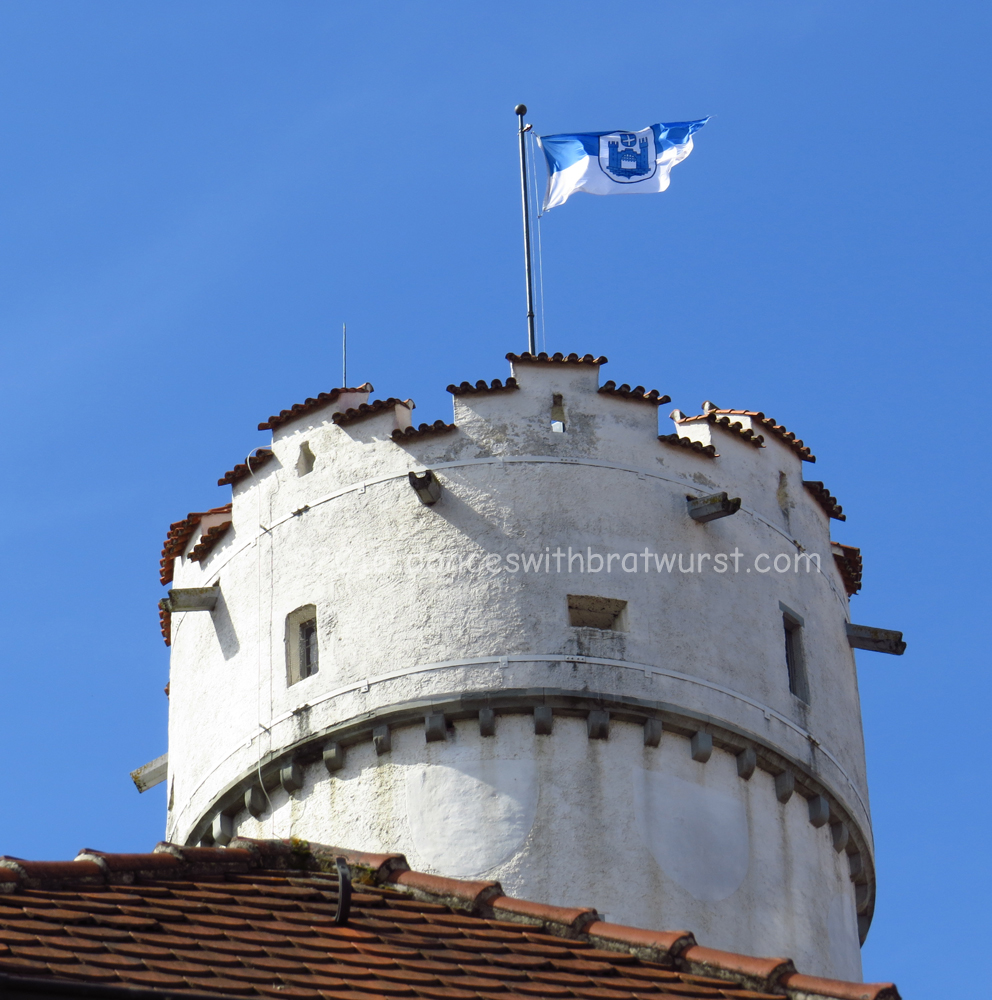 Mehlsack, with flag of Ravensburg 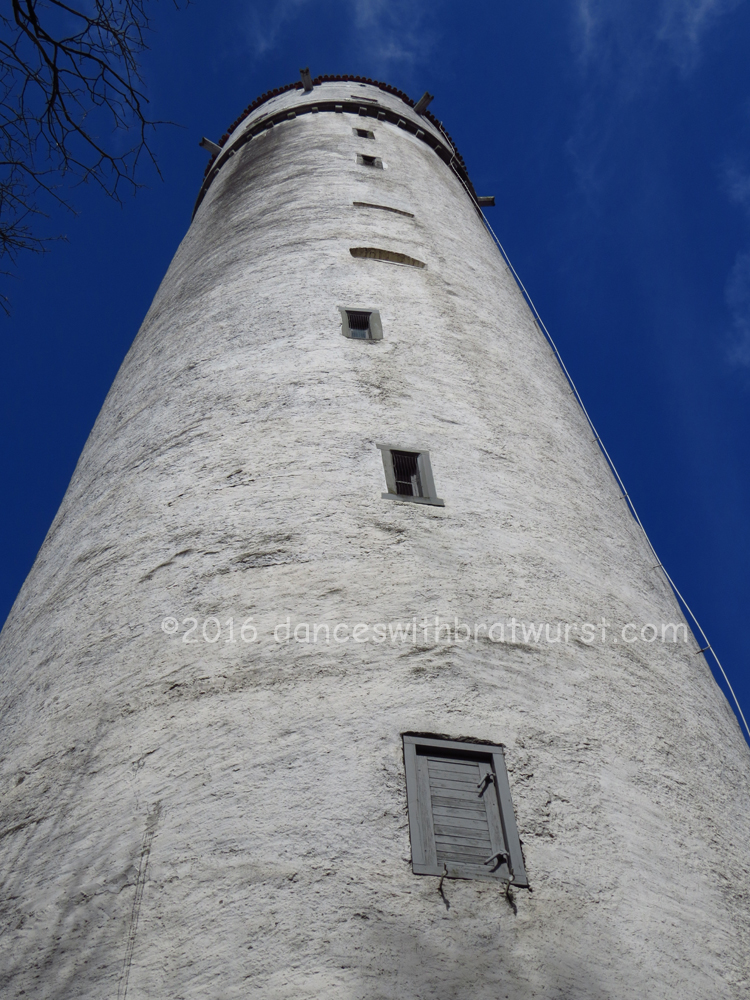 This tower is called “Mehlsack”, or “Flour Sack” and is 51m high. It has 253 steps and looks out over the city, but was not open on this day.

The path went up a very high hill, with no guardrail, and at the top was Veitsburg, a chapel to St. Vitus (closed for renovations), a former Kloster (now the site of a youth hostel), and a Biergarten that was closed. 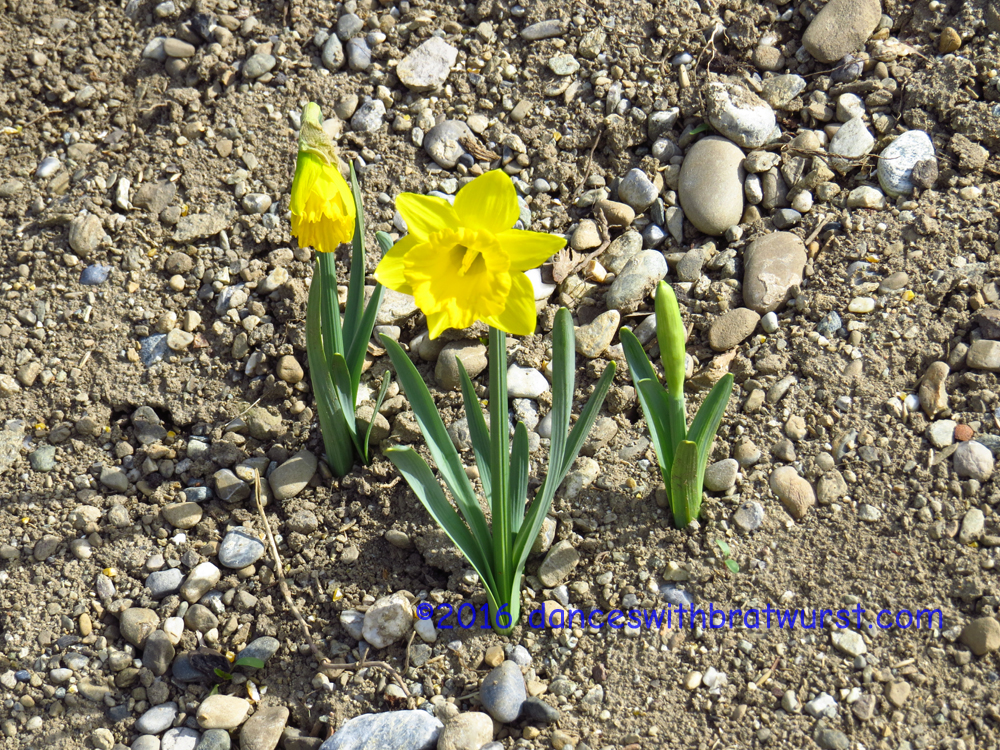 Hiking path was still under construction, but there were some flowers.

View of the Alps (to the south) from Veitsburg. 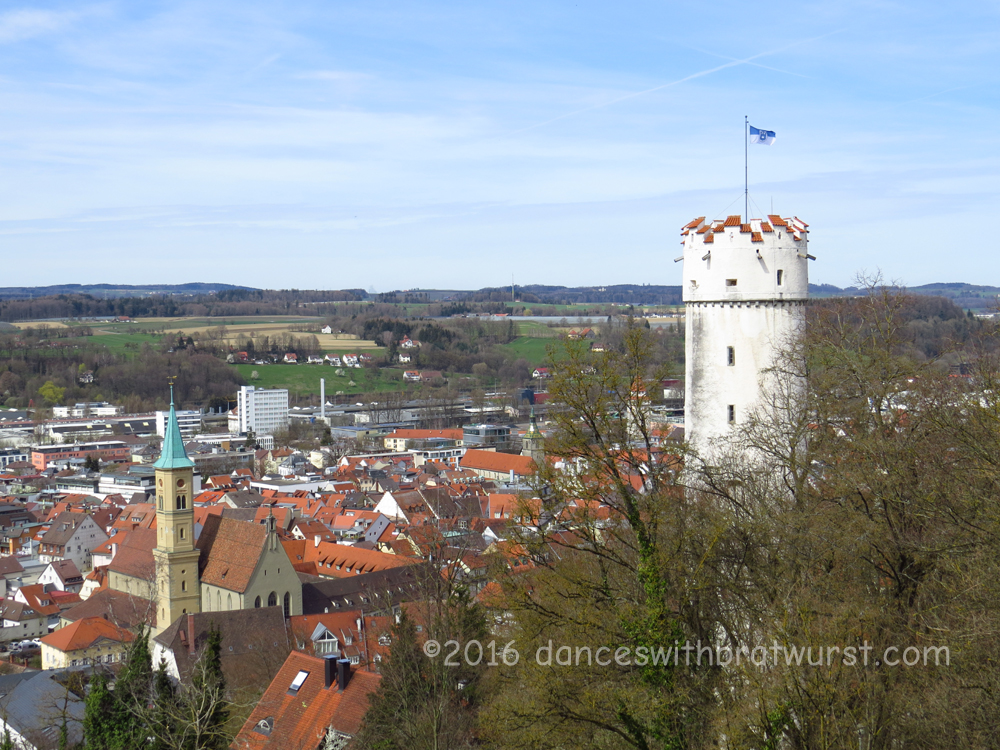 View of the city, with the Mehlsack on left and the Evangelische Stadtkirche lower left. 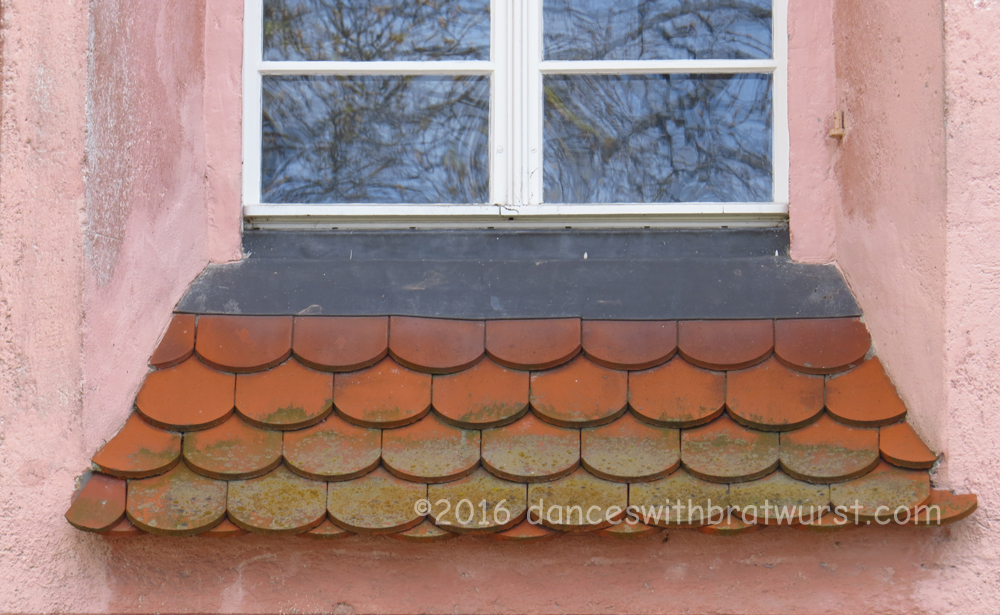 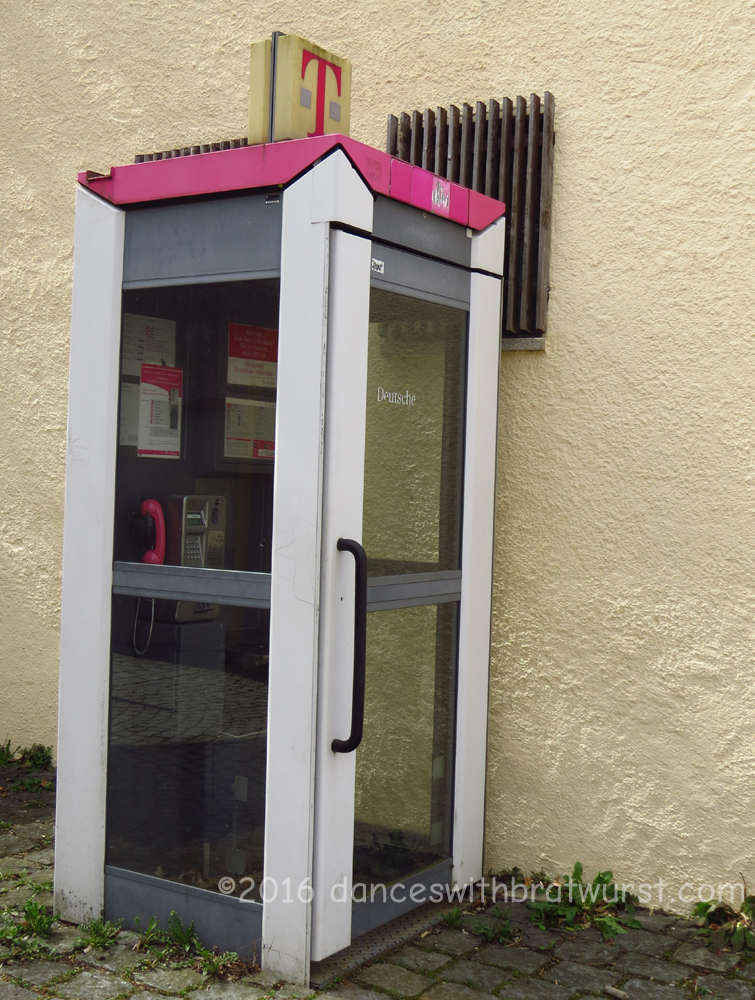 Some sort of ancient relic. 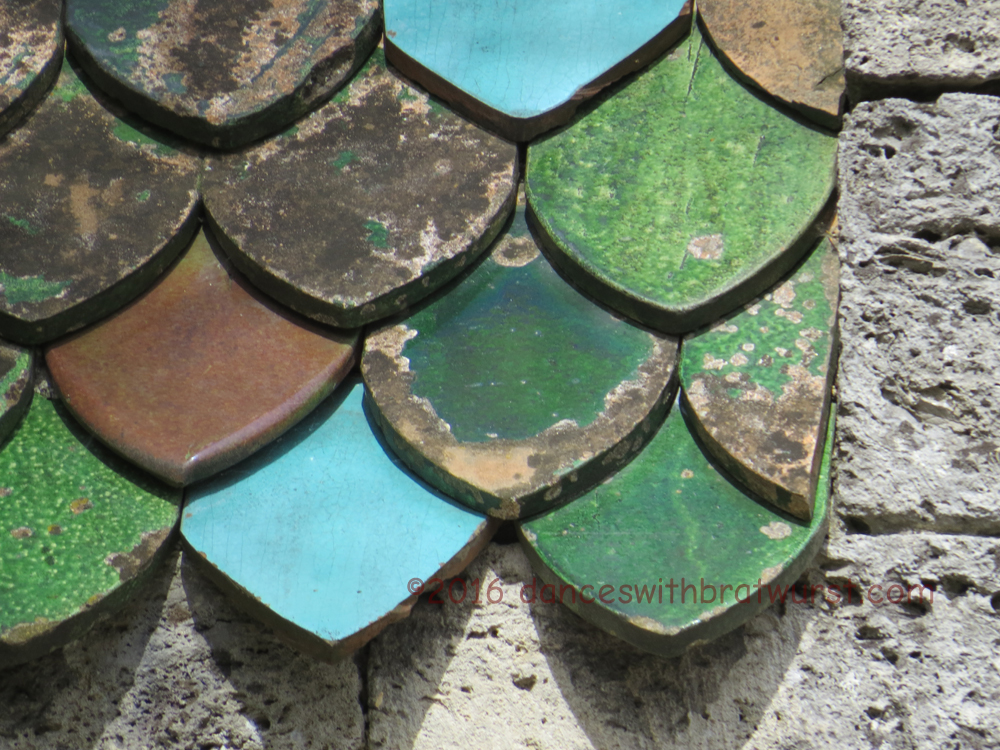 Since there was no beer, I went back down the hiking path and into the town. Plenty of time for art photos. 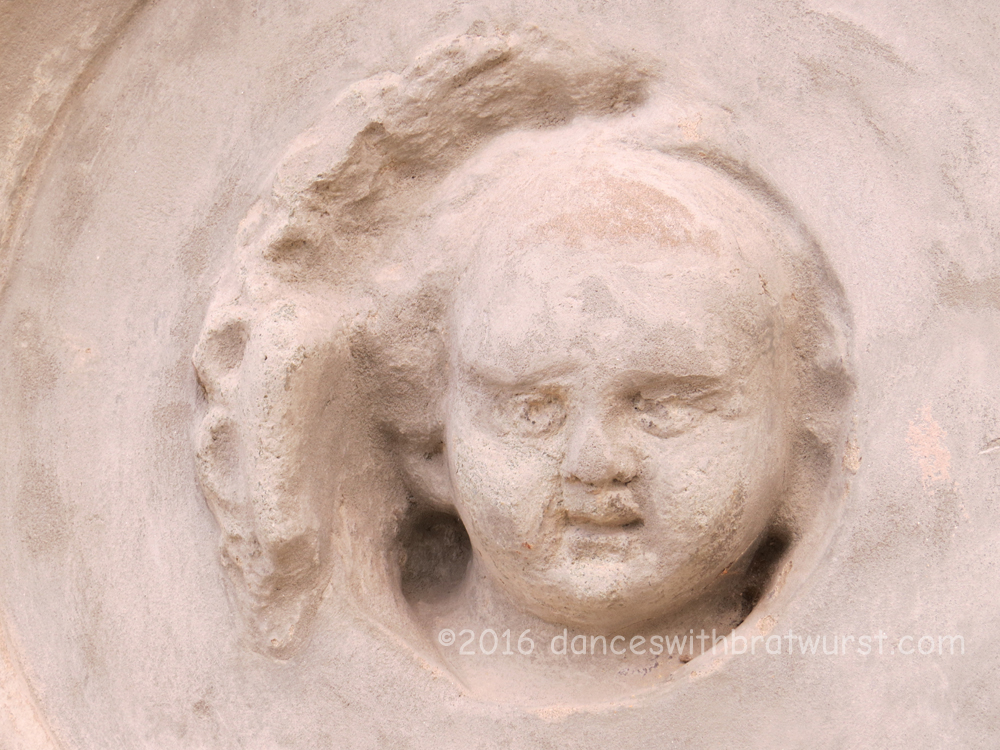 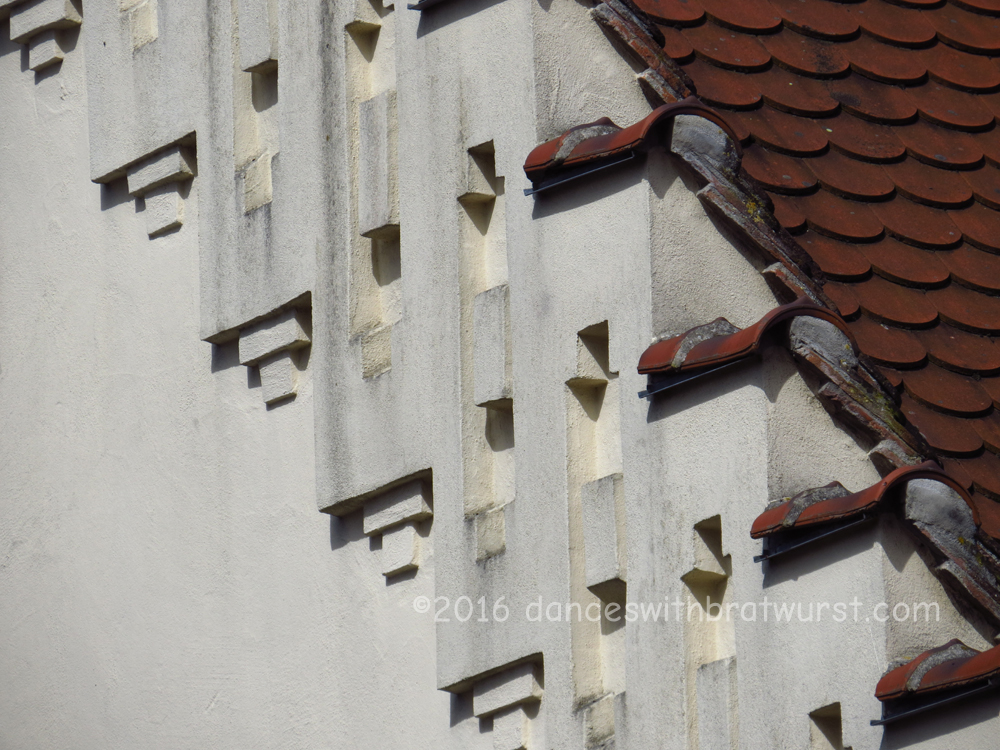 My next stop–out of the sun!!–was the Evangelische Stadtkirsche. It was built in the 14th century by Carmelites, and repurposed as a Protestant church after the Schmalkaldic War. It appears to have been redecorated a few times since then.  The stained glass windows featured important figures of the Reformation–quite different from the churches in Catholic Bavaria.  Unfortunately, my photos of the windows did not turn out very well. 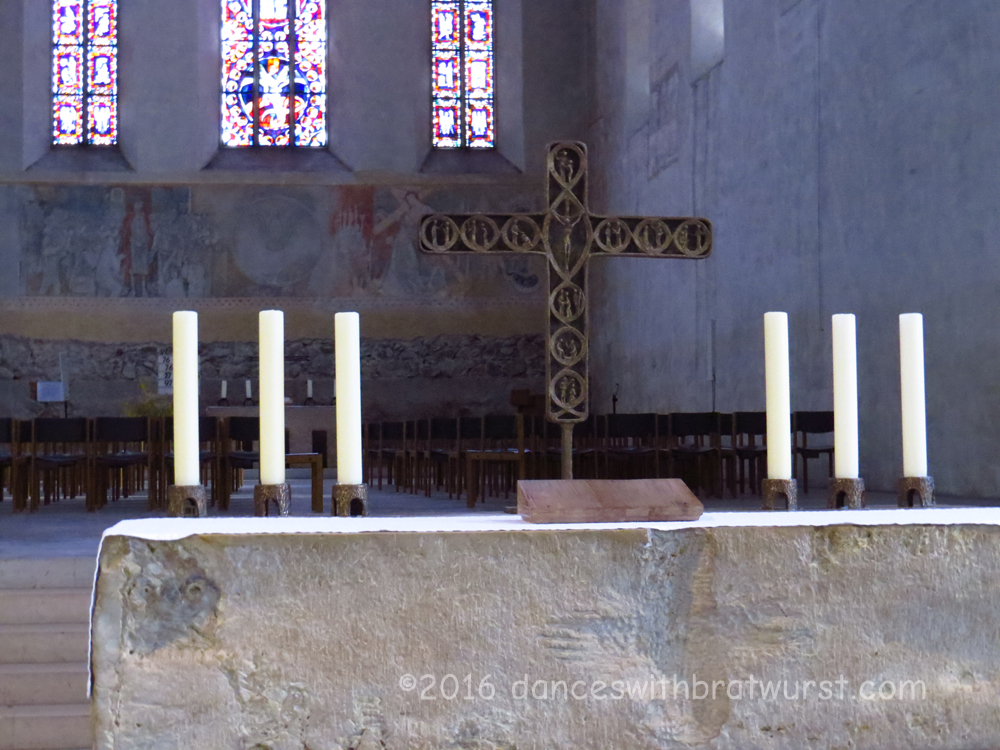 Main altar of the Evangelische Stadtkirche. 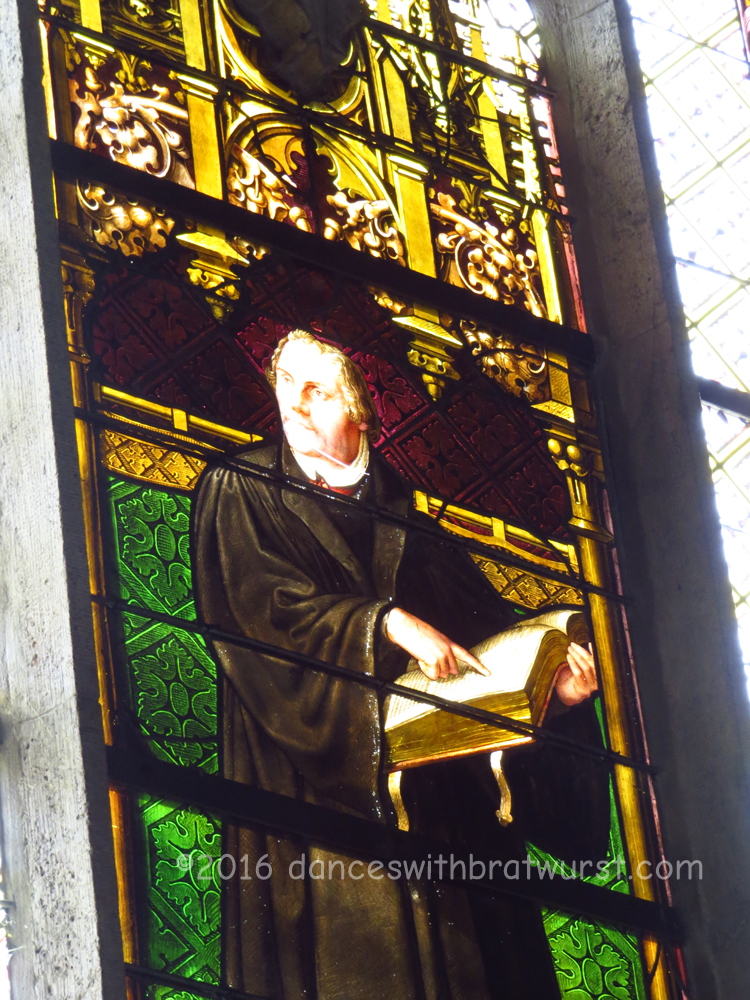 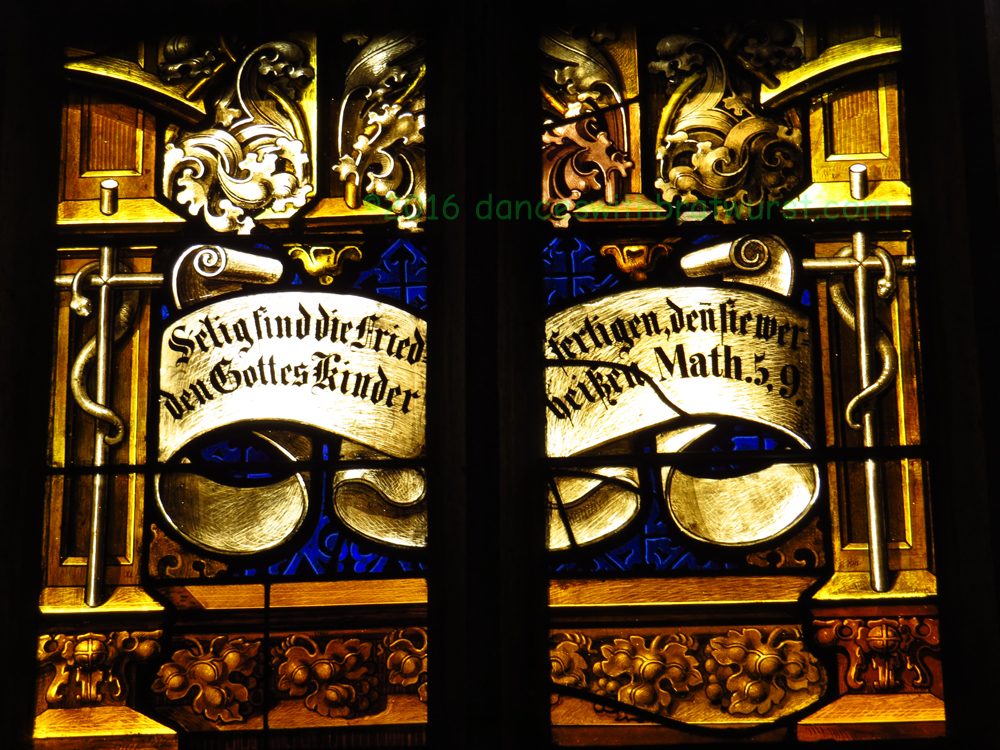 Blessed are the peacemakers, for they will be called children of God. Matthew 5:9. 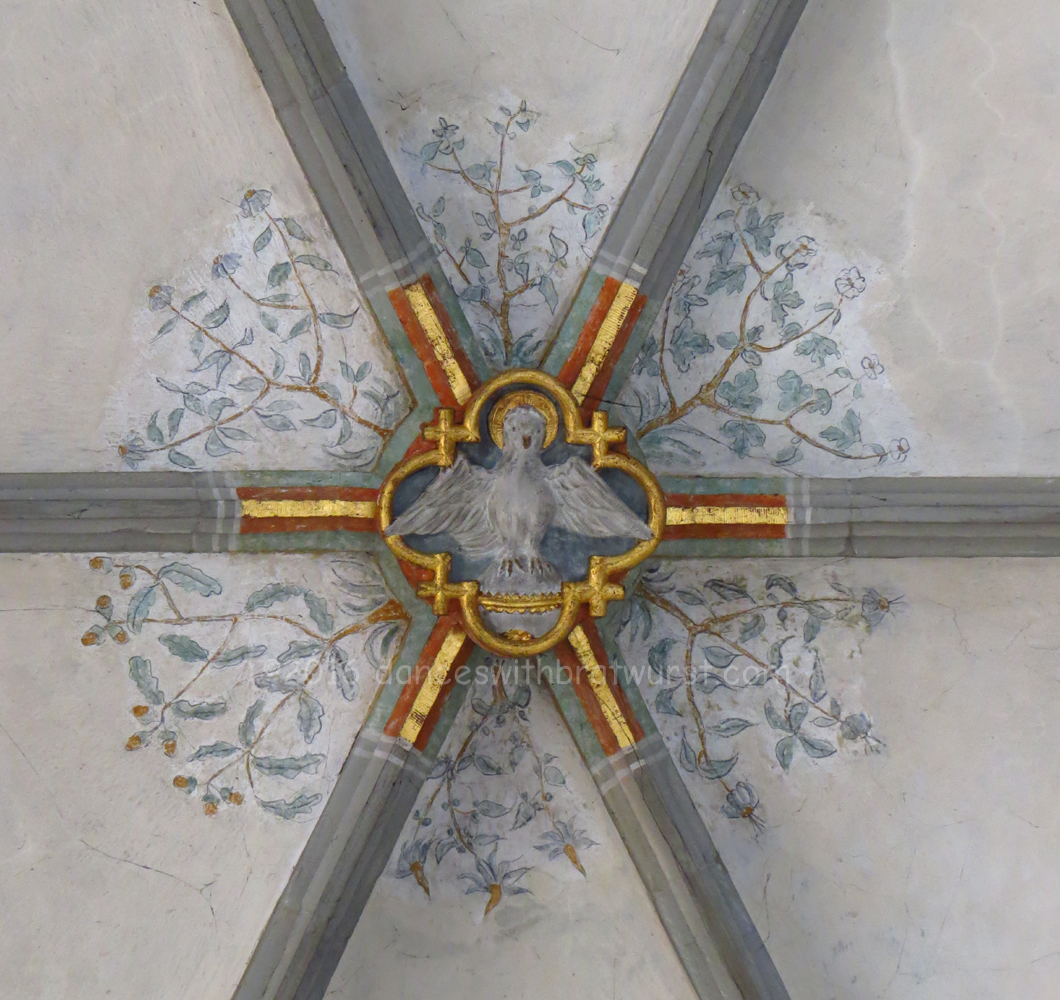 Holy Spirit, painted on the ceiling.

Back out onto the street; there was a city park along the medieval wall. 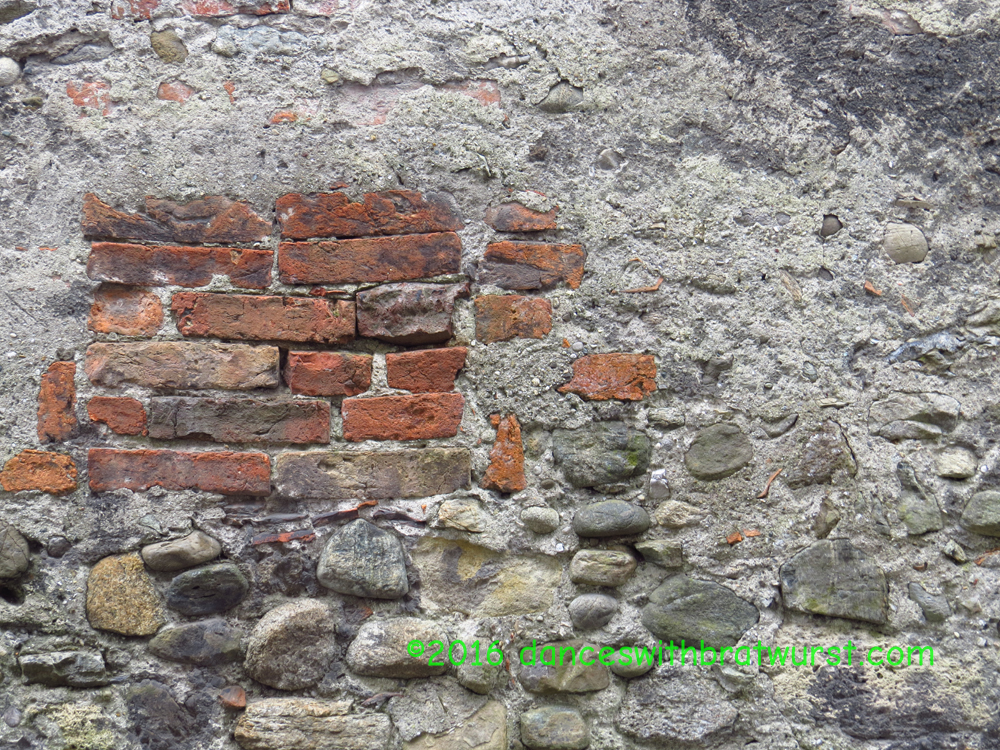 Outer wall, showing repairs over the last 500 years or so. 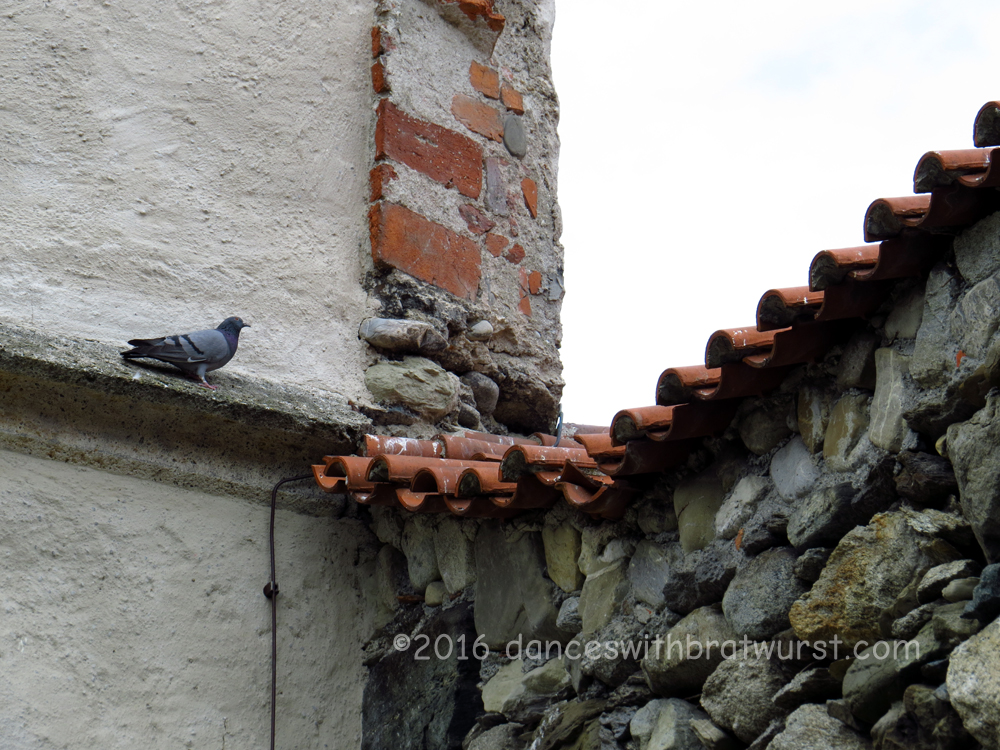 Not only humans and dogs were enjoying the park. 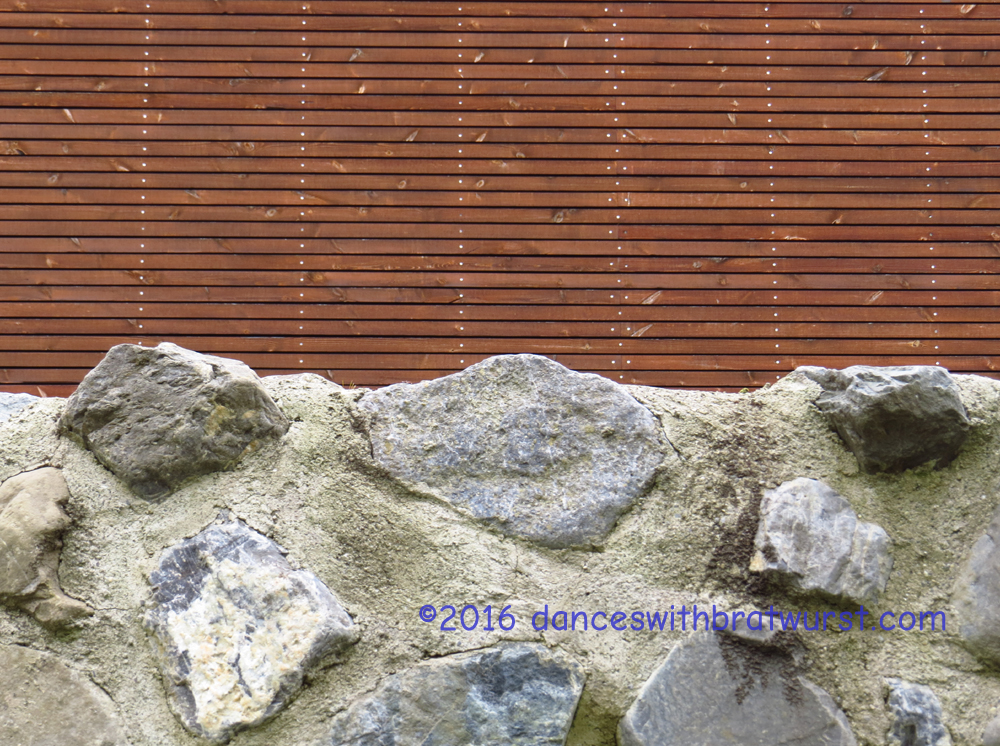 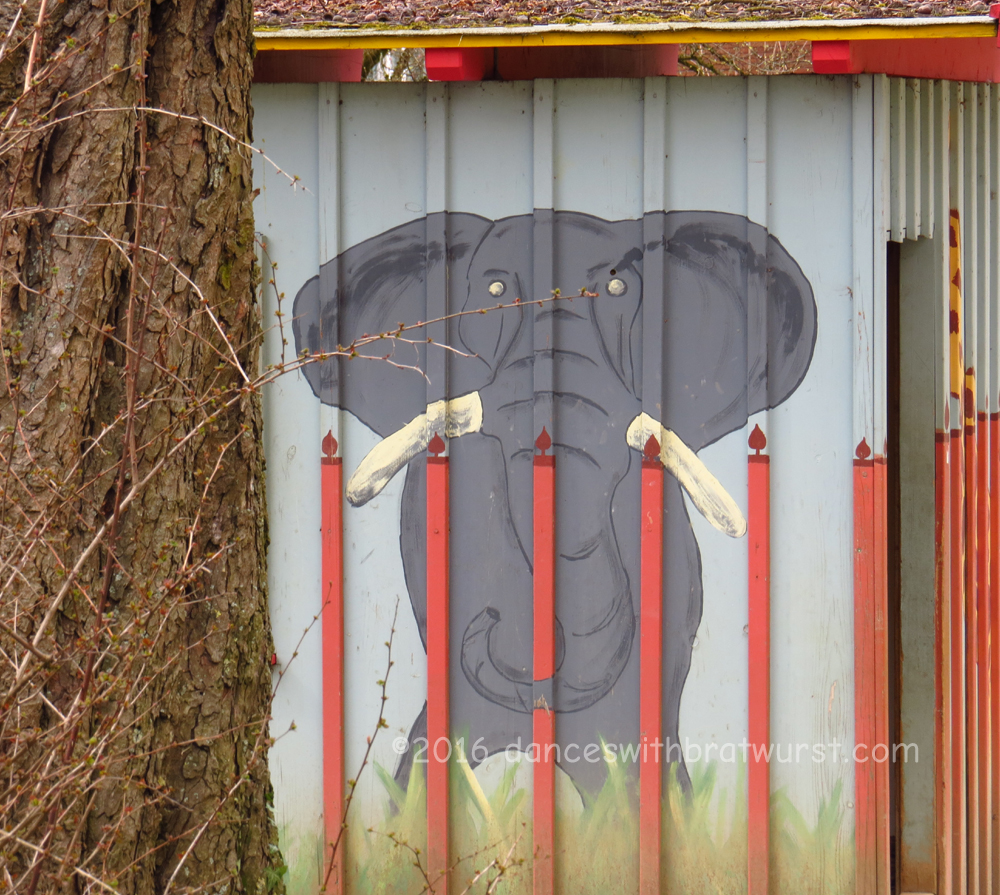 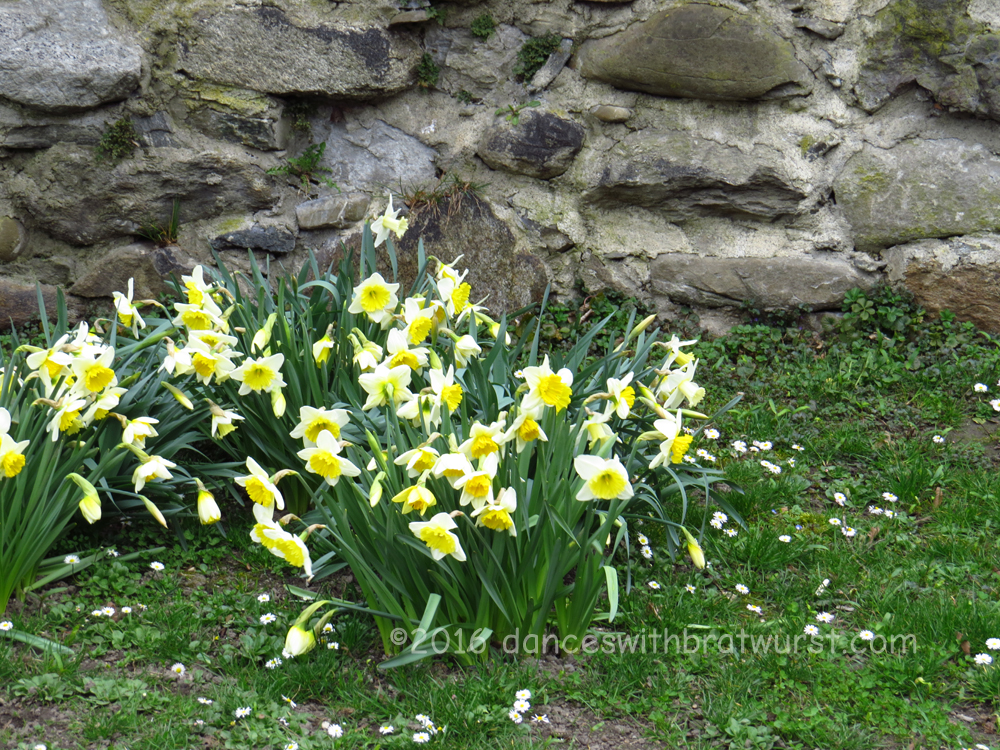 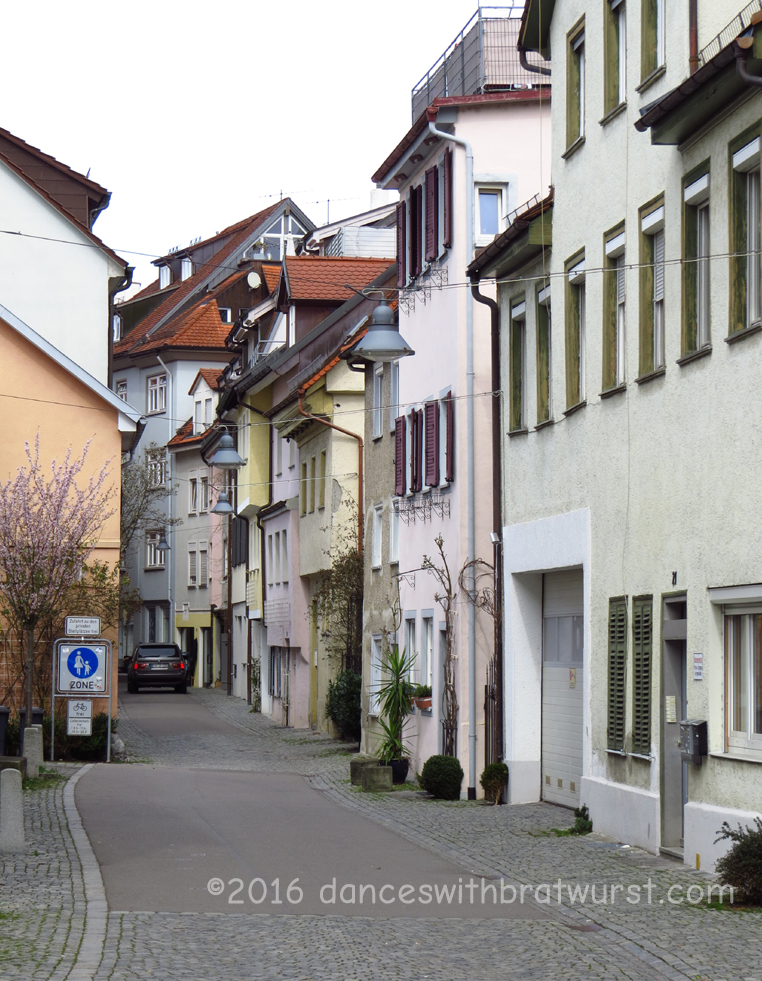 And eventually back to the Blaserturm.  51m high, and 212 steps.  A few years ago I developed a phobia of falling down stairs, especially when they’re very old and twist up nearly 10 stories, compounded with a phobia of falling off the sides of things, and so I have been avoiding towers.  But dangit, this was the Blaserturm, and I had to have some sort of interesting story to tell about the day.  So, I freaked out all the way up the tower, then kept a death grip on the back wall while I got a few photos. 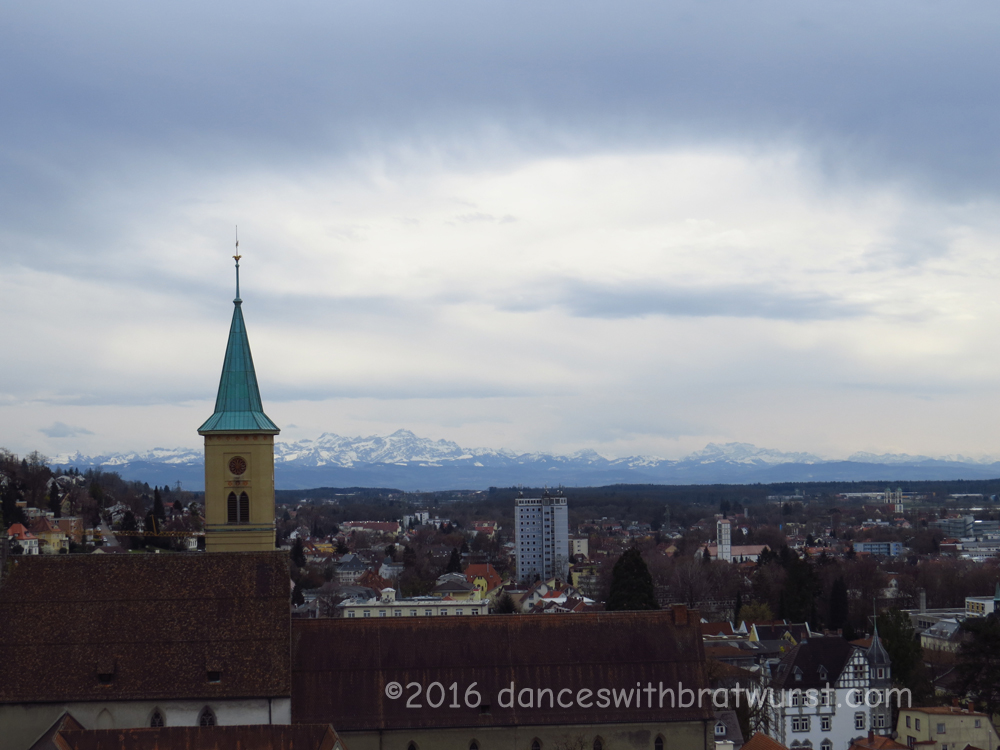 View of the Alps and the Stadtkirche from the Blaserturm. 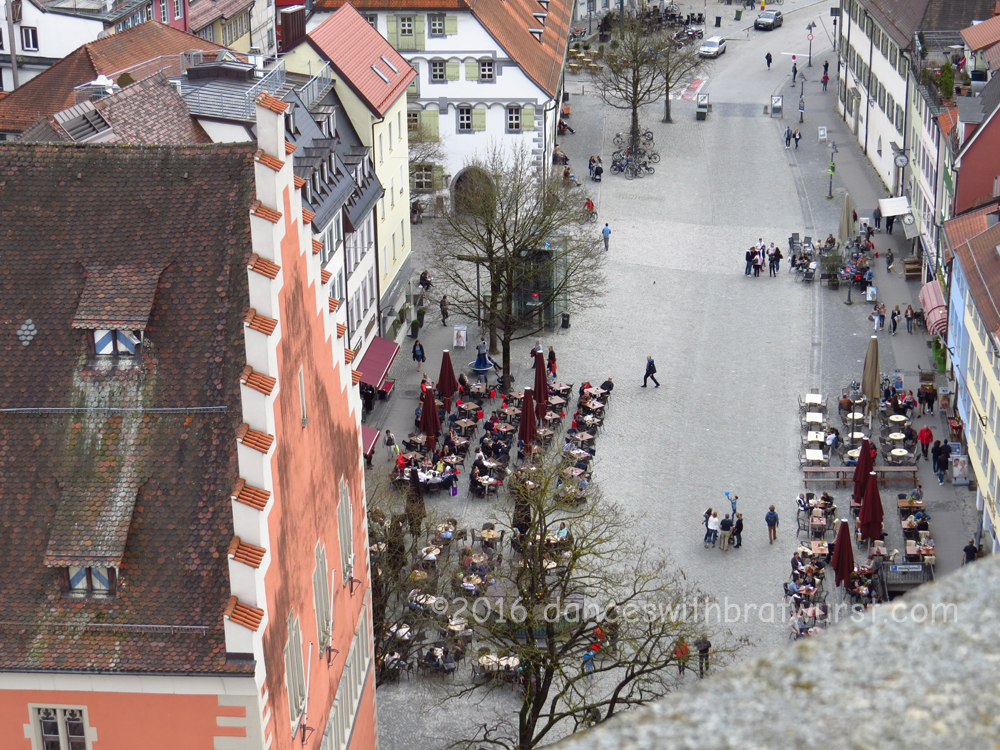 Rathaus and Marianplatz from Blaserturm. Holy sweet Bast, that’s a long way down. The building with the green shutters was built in the 15th century for buying and selling grain, but is now the city library. 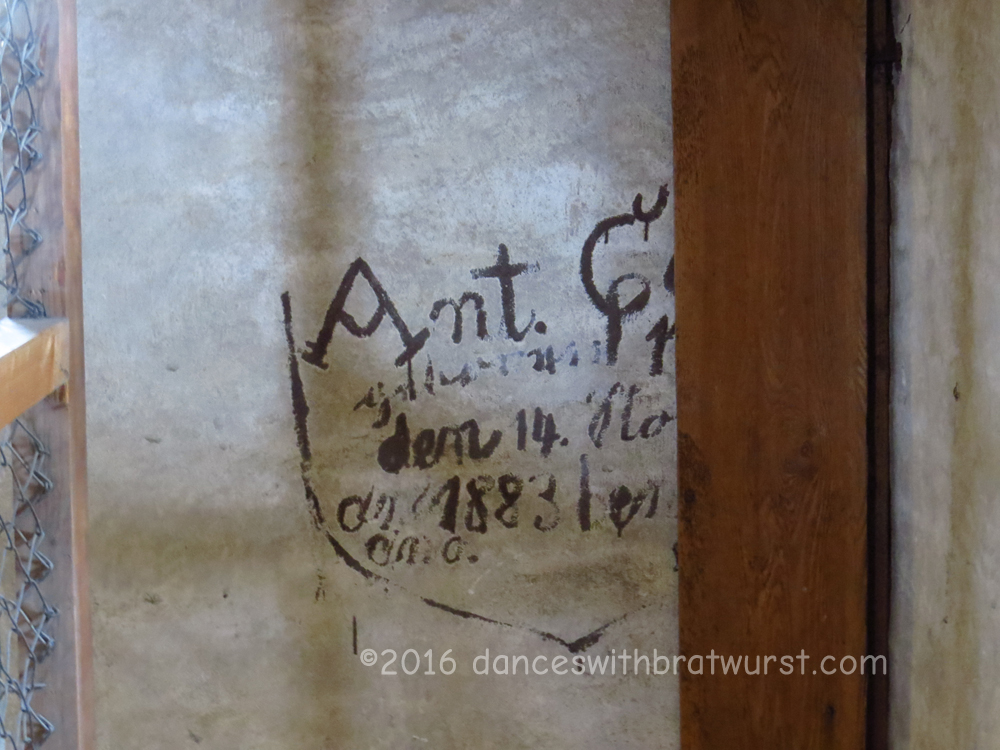 And then I freaked myself back down all those stairs and to one of those cafes for a well-deserved beer.  The end.