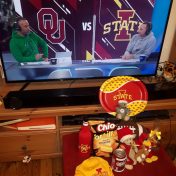 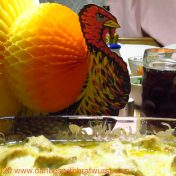 People often ask if I make the usual foods for Thanksgiving. I don’t. 1) It’s a normal weekday here; and 2) the friends and family we would invite to dinner would decline most of the traditional menu–including the bird–for personal dietary reasons. I prefer to make simple meals for just… Read more »

After several enjoyable weeks of cool weather with sufficient rain, in which we did nothing remarkable, it is Hochsummer. Iowa temperatures, with additional hours of sunlight, and no air-conditioning. If anybody needs me, I’ll be flopped in front of an oscillating fan in a darkened room, sipping tap water with… Read more »

And now some pictures from a recent Sunday trip to the 2016 Bayerische Landesausstellung, “Bier in Bayern” in Aldersbach. This was a fabulous exhibition put on by the Haus der Bayerischen Geschichte, a state historical agency that holds exhibitions around the state. The hosts for this exhibition were the former… Read more »

Last Friday, after months of saying, “Hey, I should ride into town with Roland some morning and use the U-Bahn to explore while he’s at work” I finally did. My destination was the Lenbachhaus, which owns the world’s largest collection of work by Der Blaue Reiter, a group of early-20th… Read more »

Roland has asked me to please post some photos so people know I am not just sitting at home (although if I *were* just sitting at home, there might be more posts.  That’s my story and I’m sticking to it.). During the Easter break from my language course, Roland had… Read more »

The usual apologies for silence–laptop had a Blue Screen of Death at the beginning of January after a driver update and it took awhile to get sorted out.  Seems to be OK now; many photos to catch up on. Last Sunday we took a drive over to Landsberg am Lech,… Read more »

New Year’s Eve in Germany is called Silvester, as Dec 31 is the feast day of a pope by that name.  Why him and not Felis silvestris?  I’m not sure.  Possibly because the traditional German celebration includes setting off copious amounts of fireworks–they started in our neighborhood around 5 p.m…. Read more »

Happy Second Christmas Day! Shops and offices are closed on December 26, so a short post before we drive somewhere for a nice walk (today is sunny with a high of 53°F) and more Christmas later. I’m told it is not unusual for there to be no snow at Christmastime… Read more »

The theme for my parents’ visit was “Christmas Markets” and now I will be sharing some photos. On the first Saturday of their visit, we went up the road a bit to Ingolstadt.  Overnight there was snow, and it fairly quickly turned to a soaking rain, but that was no… Read more »