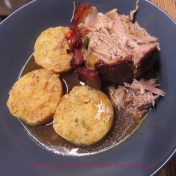 Somehow I managed to live here for five years without purchasing any Kümmel (caraway). It’s used in a lot of traditional Bavarian foods, but in normal times I didn’t try to make any of these at home. For example, Krustenbraten, a roasted pork dish characterized by a crispy rind that… Read more »

The public ceremony was canceled, so we had our own at home with three classic Freising beers.

We’ve just returned from two weeks enjoying Norway. It will take months to sort through and edit approximately eight thousand photos (not including the Bad Cellphone Photos™…). One fun thing about living in Freising is that we can find beer brewed two miles from our home just about everywhere…here is… Read more »

And now some pictures from a recent Sunday trip to the 2016 Bayerische Landesausstellung, “Bier in Bayern” in Aldersbach. This was a fabulous exhibition put on by the Haus der Bayerischen Geschichte, a state historical agency that holds exhibitions around the state. The hosts for this exhibition were the former… Read more »

The symbol/mascot of Freising is a bear; some years before my first visit a number of bear statues were created and decorated to celebrate the 1250th anniversary of the town.  Many are still displayed near local businesses. This bear is at Hofbrauhaus Freising–no relation to the one in Munich that… Read more »