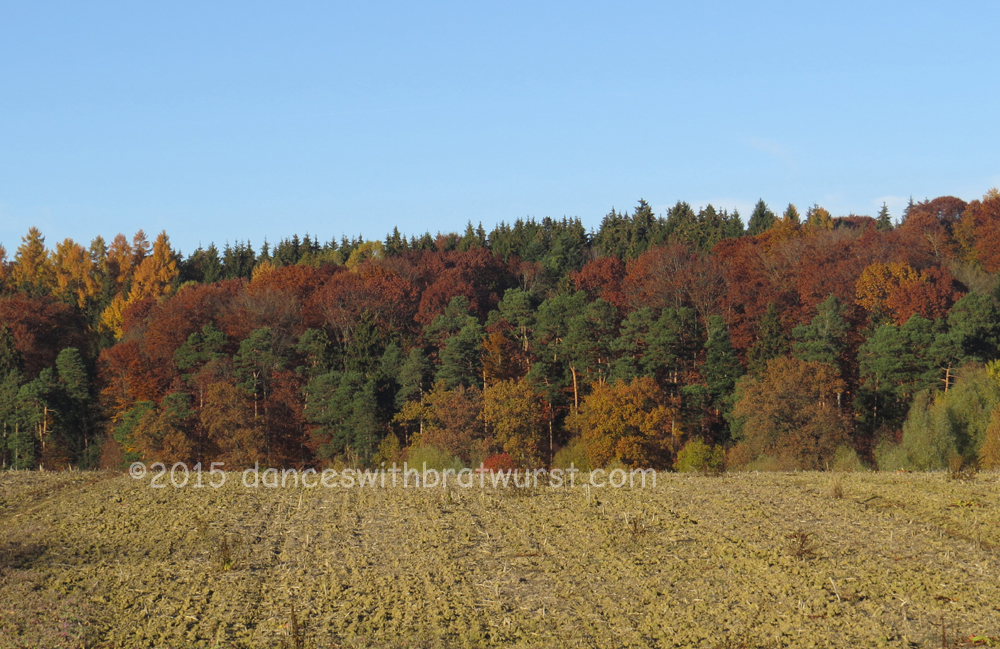 Autumn is progressing nicely…the oranges of Oktober are fading into the browns of November.  I’m crunching through a lot of leaves while I walk, and the sun is at an interesting angle. 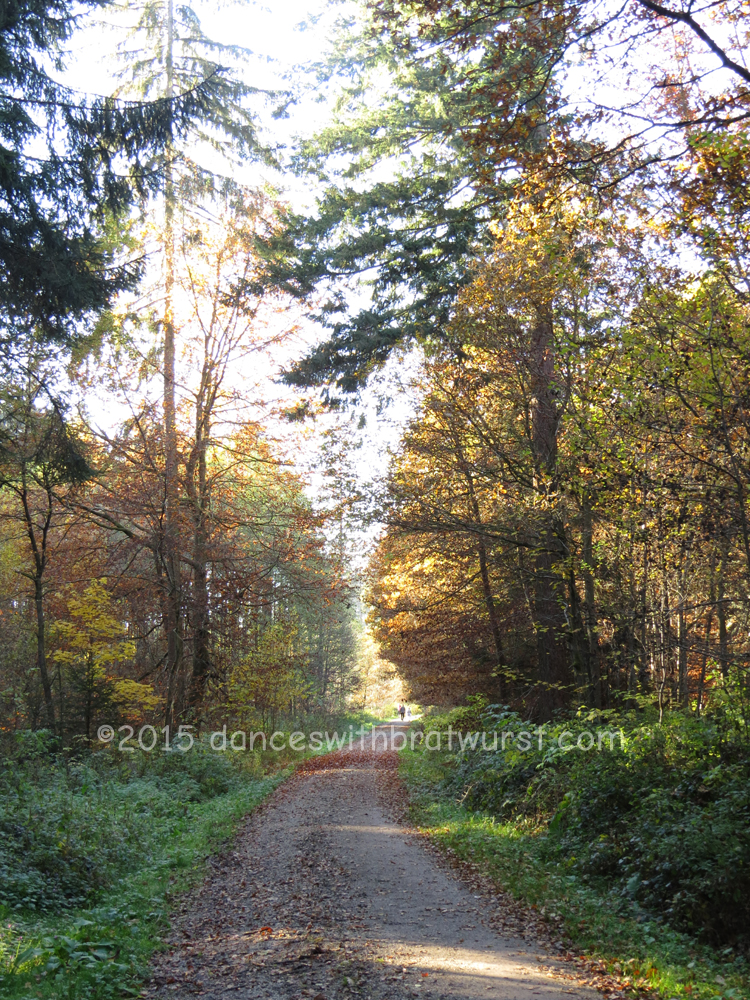 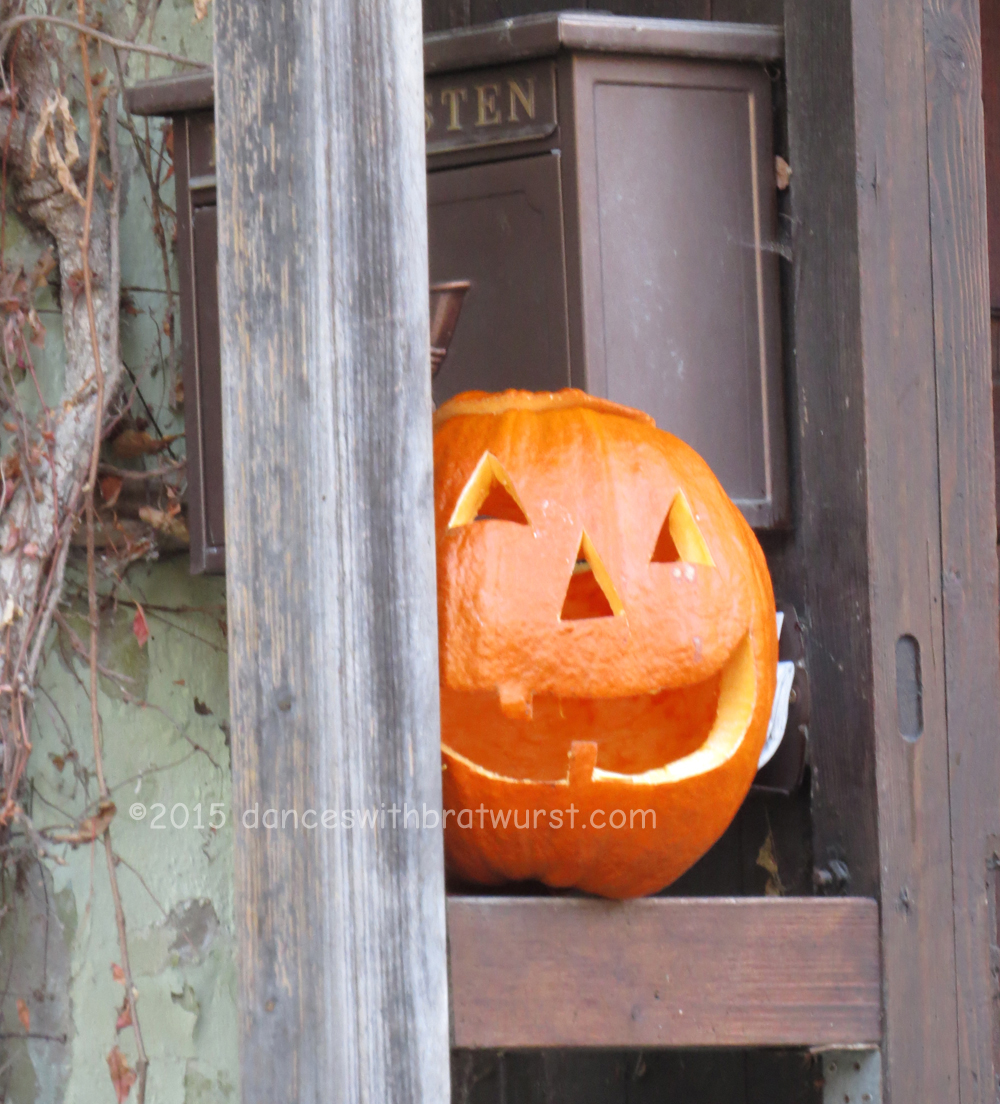 There were some carved pumpkins and some yard decorations sprinkled around the neighborhood, but not very many, and not until just a few days before Halloween.  No set trick-or-treat hours here; we saw some children in costume in the late afternoon, and again in the evening as we set out for dinner.

Roland gave me a special Halloween treat–a five-course themed meal at an inn in Kirchdorf (one of a dozen Kirchdorfs in Germany, it turns out…).  It seems the inn has been in the family for over a hundred years, and the older brother of the current generation was trained as a chef before returning, and they specialize in local and seasonal ingredients.

Please enjoy my bad phone pictures of a most enjoyable meal!

The meal began with a green cocktail and a “Gruß aus der Hölle”–a greeting from Hell, beef tartare served in a ring of fire. 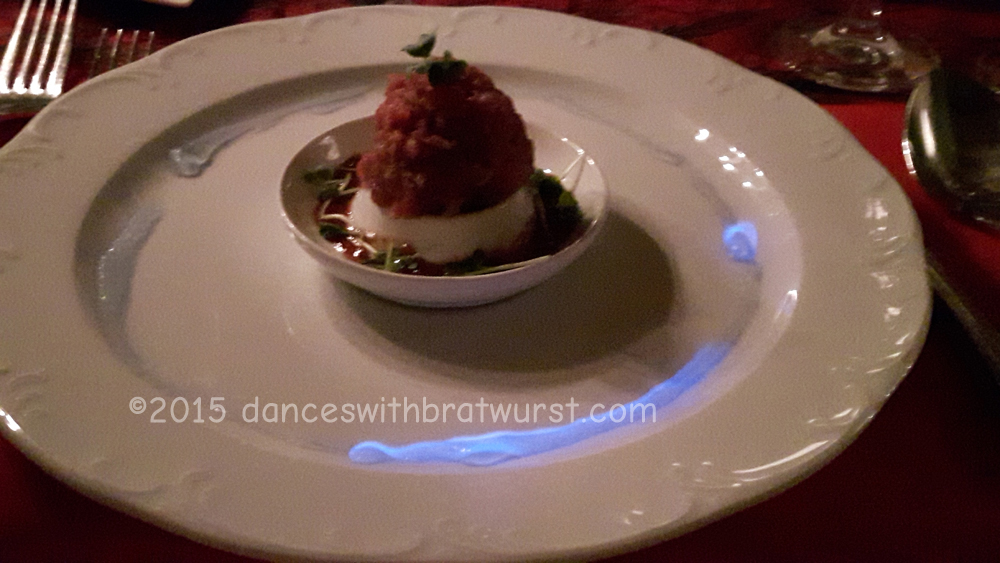 The fires of Hell are Sterno. Don’t try to taste them.

The salad course (see the green stuff on the plate…) was Zombie Brains, which turned out to be veal sweetbreads. 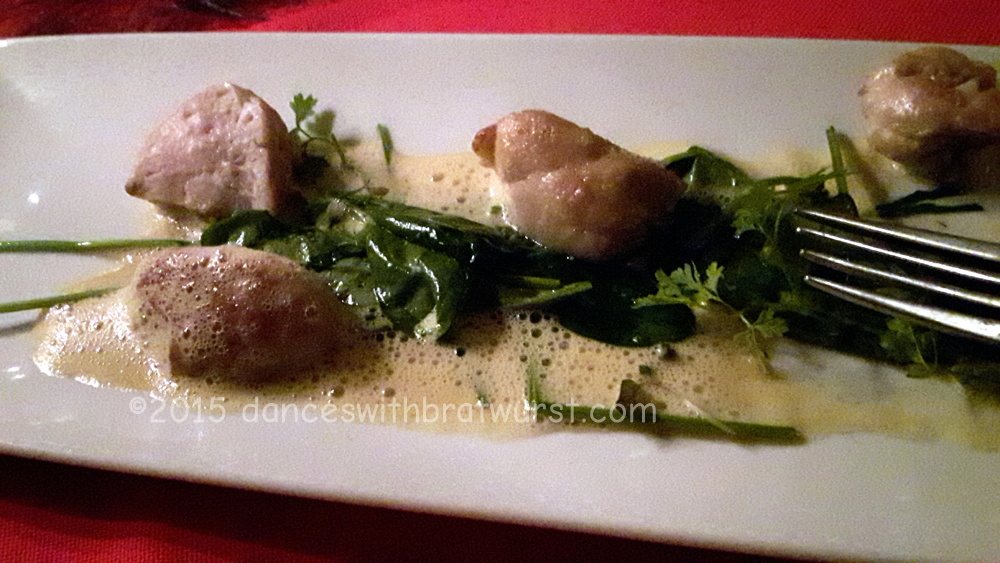 Next was „The Devils Eye“ floating on a slice of Spanish chorizo in a carrot-ginger cream soup. 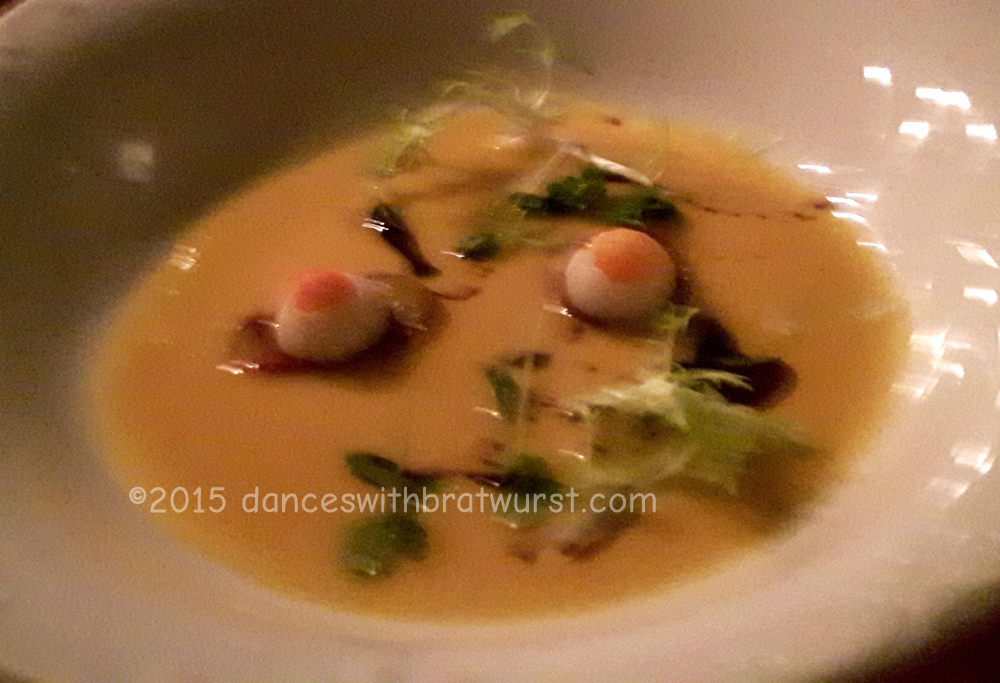 Go ahead, lick the bowl.

The main course was a creepy head…. 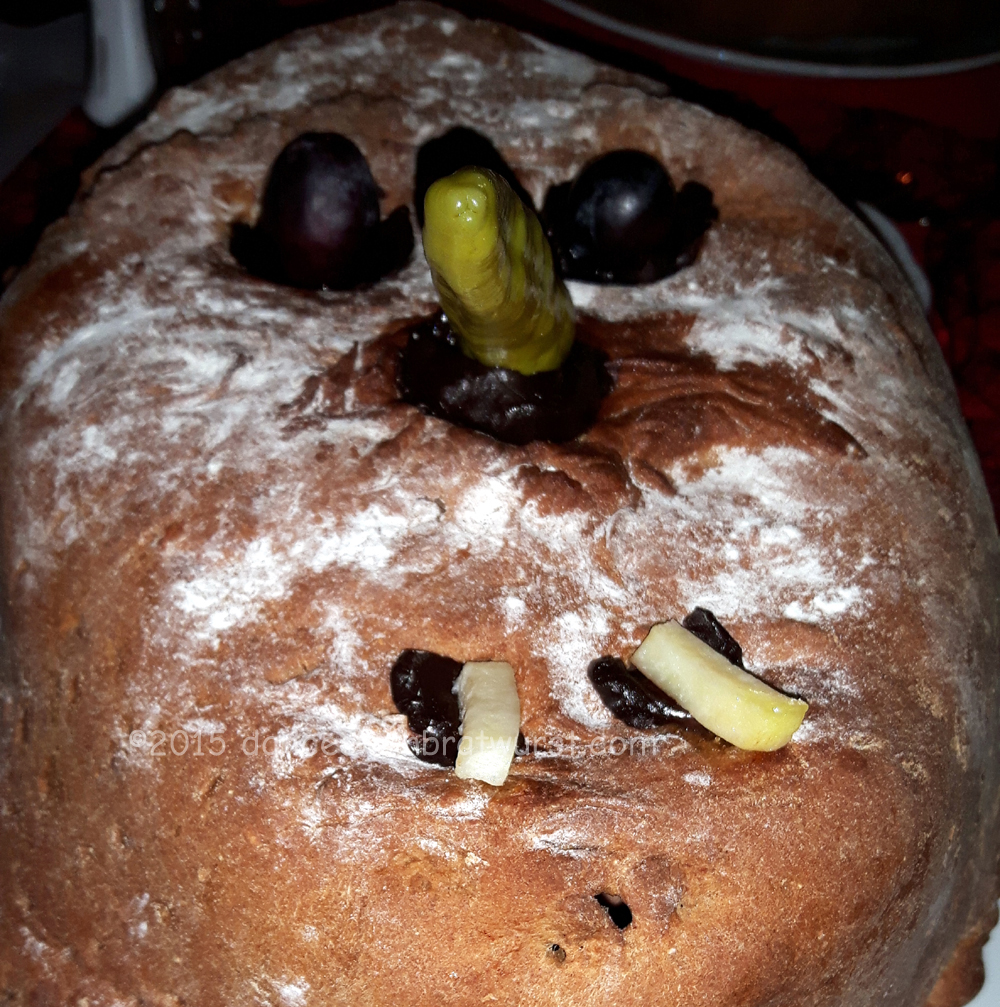 Nein!  Creepy bread head was whisked away to reveal a very delicious veal filet served with Steinpilz (which you may know as porcini), Rosenkohl, a smokey vegetable paste I am too ignorant to identify, and a bit of fried potato dumpling.  Mmmm…dumpling. 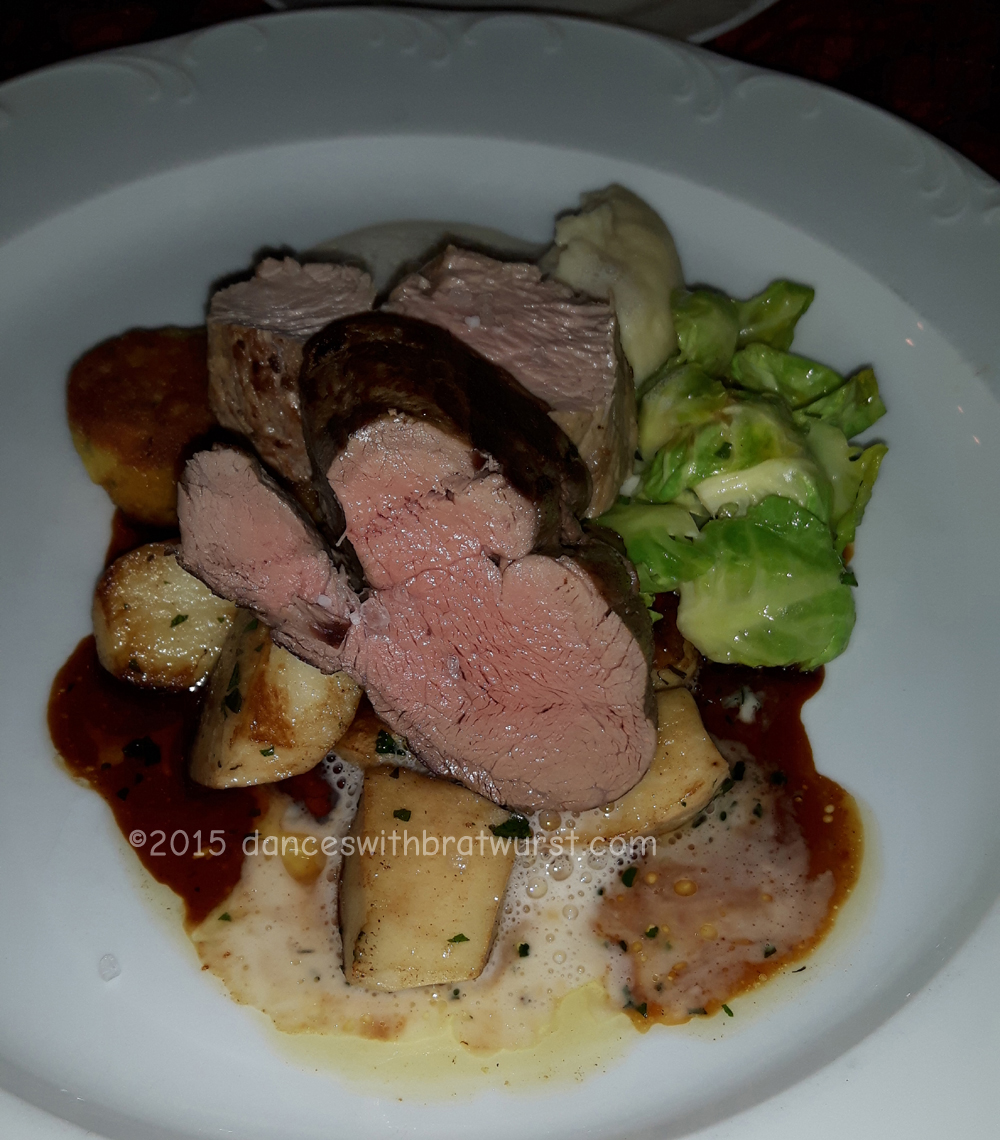 The finale of this amusingly creepy feast featured the world’s happiest chocolate cookie spider–he has just discovered some chocolate Eis and some fresh figs in his web. 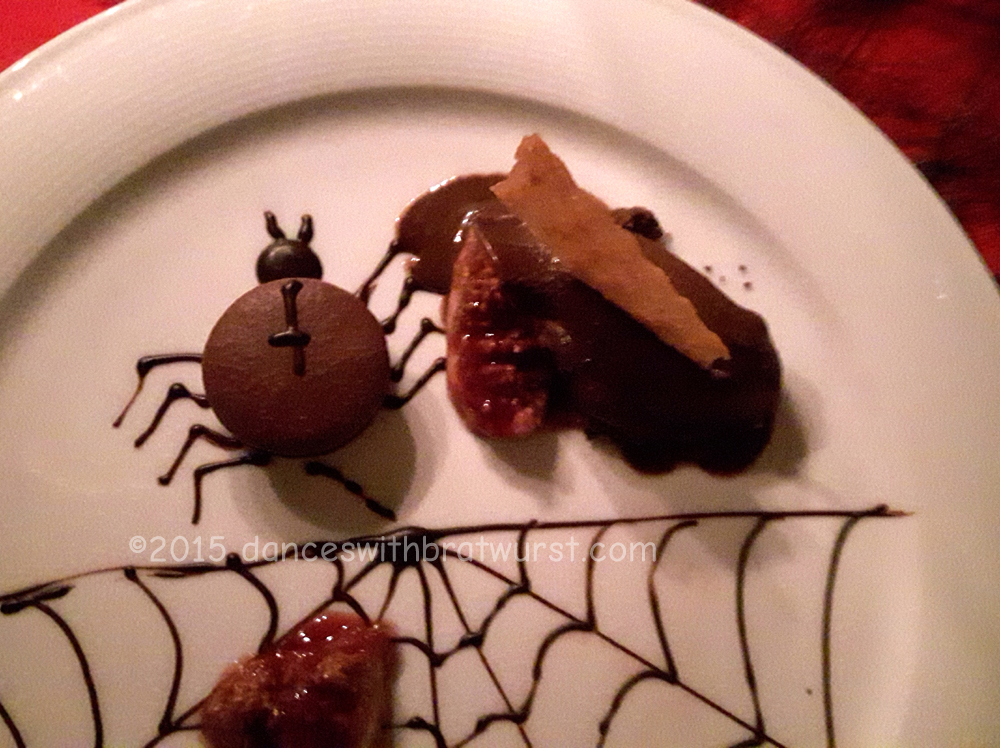 You’ve already licked the soup bowl, go ahead and lick this plate.

It was a lovely evening.

One thought on “Herbst und Halloween-Menü”